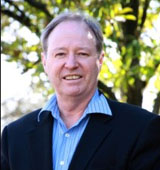 Brian has held the position of CEO at the councils of Wakefield Plains, City of Elizabeth, City of Tea Tree Gully and Liverpool City Council, NSW, before taking up his current position of CEO at Light Regional Council. During the period between 2003-2007, Brian had been providing consulting services to the public and private sectors within South Australia. A fellow of Local Government Manager’s Australia and an inaugural chair of the CEO network LGMA. He has been recognised and appointed a Business Ambassador for the State of South Australia.